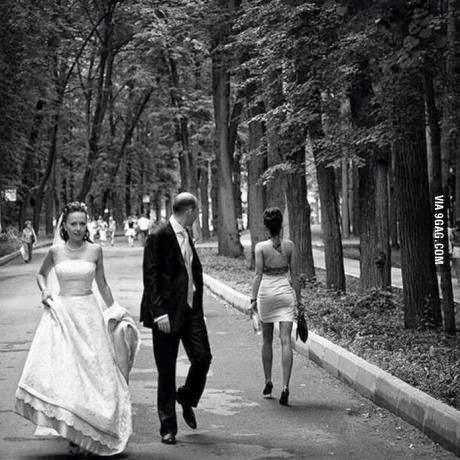 Lover's remorse is the sense of regret after having made a lifelong commitment to one person, in this case, a spouse. For the sake of this article, let's go with spouse, since it has a degree of finality. A lover hopes that all that time, energy and resources will have been spent on a worthwhile pursuit of a significant other. It comes fear of making the wrong choice, guilt over extravagance, or a suspicion of having been overly influenced by the current spouse. It's that longing feeling you get when you are with someone, and you feel like you've made a mistake. There may or may not be something inherently wrong with your choice, but the last thing you feel is contentment.

Lover's remorse is created through increasing distress associated with increased choices. I mean, the more potential mates one sees, the more difficult it becomes to pick one. Then they get caught up in the nitty gritty, the minute details. “He isn't tall enough.” “She is too needy.”  “He is too arrogant.” “She is too independent.” One looks around and sees so much on offer, but cannot partake because they are committed, as if there’s much fundamental difference in choice. Yes, the grass on the other side always looks greener. And it always will, no matter how green yours is. At some point, one must settle for what they want, in terms of key acceptable attributes, and try to enjoy life from there onwards. One finds themselves thinking about what they will be missing if they decide to go ahead with 'the one in the hand'. Others think that the universe has a twisted sense of timing, presenting 'the right one' just as they've committed their life to someone.

For a goal-oriented lover (like those who badly want to get hitched, and time is running out), getting the 'wrong' spouse may not be a significant mistake. But for more involved decisions, the consequences of a wrong decision are significant. As the number of choices increase, it is easier to imagine a different choice that may have been better than the one selected. The constant comparison to one's expectations induces regret, which reduces the satisfaction of any decision, even if it fills the lover's needs. When there are many alternatives to consider, it is easy to imagine the attractive features of rejected choices and there is a decrease in overall satisfaction with the chosen spouse. And yet, to have any form of happiness (with a spouse), one must inevitably choose a spouse.

Factors that affect lover's remorse include resources invested, the involvement of the lover, whether the spouse is compatible with the lover's goals, and what positive or negative evidence the lover encounters post-commitment that confirms or denies the spouse as a good idea. The effort invested in the spouse (material, intellectual, psychological, and others) is directly related to the importance of the spouse. Spouses that require high amounts of effort but do not bear high rewards are likely to lead to lover’s remorse.

Lover’s remorse is nothing more than a discomforting voice in your head that isn't based on any fact. Because, by nature, having a spouse is indeed fulfilling a fundamental need. The rest are just tweaks, according to preference, which must not be taken lightly, nor compromised on, for the sake of one's sanity.

What happened between Avengers and Avengers: Age of Ultron?

Avengers: Age of Ultron is about a week away, and a lot has happened since the previous Avengers movie. There will be those in the audience that will be confused, others dazed, others asking themselves questions no one will be willing to answer satisfactorily during the movie. As such, I've had the pleasure to present some trivial information (most of which is fact, by the way) in order to curb general curiosities. As such...

The following takes place between Avengers and Avengers: Age of Ultron...

After the Battle of New York, Iron Man went on a frenzy. Due to his post-traumatic lack of sleep, he builds 35 suits (seen in Iron Man 3). His newest addition being the extremely faulty prehensile suit Mark 42. Guess after spending time with Thor (whose hammer always finds him) and Captain America (whose shield returns to him when thrown), he decided to do the same with his armor. Pretty nifty, huh? Then he gets surgery to remove the shrapnel out of his heart. He moves into The Avengers Tower, seeing as his Malibu home was destroyed. He builds Mark 43, which is a significant improvement on the Mark 42, with an inverted colour scheme, along with a Hulk-buster unit, to 'contain' the Hulk if he ever goes rogue. Along the way, Captain America takes his new pal Sam Wilson (the Falcon) to meet Stark. Stark says he recognized Sam's outfit (the EXO-7 FALCON) as one of his (earlier) inventions. He asks Sam if he'd like to be an Avenger. Sam declines, stating that he isn't yet at that level. Nevertheless, Stark says whenever he's ready, he'll be welcome. He also hints about outfitting him with a next-gen Falcon suit, stating that the one he used before was "prehistoric". Rhodey (War Machine), who has been on several peacekeeping missions, falls in and says that he better not try to claim one of his suits. Sam retorts that heavy artillery is not really his thing. It's not like he's over compensating or something. Rhodey challenges him to a race, whenever he's ready. Seeing as both are Air Force pilots, it should be interesting to see who wins.

After New York, and having nothing else to do in this confusing new world, he devotes his time to the peace-keeping efforts of SHIELD. He undergoes training in modern combat methods and strategies, and even gets a SHIELD tactical uniform. He carries out various missions until he gets caught in the drama that follows the events of Captain America: The Winter Soldier. After the fall of SHIELD, he goes on a soul-searching mission, and he eventually realizes that he does not need SHIELD to be Captain America. That he serves people, not governments or corporations. His buddy Stark, wanting to make him look more modern, makes changes to his 'SHIELD-issue' costume and adds a few technological upgrades to it and his shield. He also invites him to live in Avengers Tower. He and Stark laugh about having African-American sidekicks, who might someday graduate into full-fledged heroes.

Bruce Banner remains with Stark, and they spend plenty of time together, playing with their toys... Er.. That sounded wrong. Okay. Stark, having rebuilt Avengers Tower, invites Bruce to go live with him so they can do science-y things. There's one condition though. Bruce should not Hulk-out anyhow, or else Stark will charge him for damages. Bruce agrees. And inevitably hulks out. And Stark takes a cut from Bruce's weekly stipend to cover for the damages. While Bruce is there, Stark takes that opportunity to study him and his ability, to help him learn to control the beast better. They end up becoming close friends, which, for some reason, bothers Captain America.

Probably been doing Asgardian stuff. You know, challenging people to brawls, occasionally visiting his girlfriend on Earth from time to time, going to check on Stark in his Tower, having arm wrestling bouts with the Hulk.

Probably did several SHIELD things in between. Probably dated (and broke up).

These are normal twins until Baron von Strucker (the current leader of Hydra, who probably worked alongside Red Skull) finds them. He uses the Scepter to perform experiments on them, along with several other 'volunteers'. The twins are the only ones that survive. This is (most likely) due to a genetic mutation, their father being 'The Master of Magnetism'. Anyway, the Scepter only serves as a high-powered electrical surge to kickstart their latent abilities, something that has Baron von Strucker completely fooled as to the nature of the Scepter. Pietro becomes the speedster Quicksilver, and his sister becomes the telekinetic Scarlet Witch. 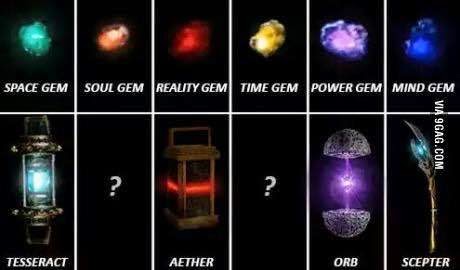 In the beginning, Thanos gave Loki the Scepter (Mind Stone) to help him conquer the Earth and get him the Tesseract (Space Stone). Loki wound up losing both of them. Thor took Loki back to Asgard using the Tesseract, leaving the Scepter on Earth, which somehow wound up in the hands of Baron von Strucker. While on Asgard, the Aether (Reality Stone) surfaces, and is eventually relieved from the hands of the dark elf, Malekith. The Aether is sent to Knowhere, to be kept with the Collector. The Orb (Power Stone) is retrieved from a dead planet by Star Lord and Thanos sends Ronan the Accuser to retrieve it. Ronan gets it, then refuses to take it to Thanos. Ronan eventually loses it (along with his life) to the Nova Corps. We don't yet know what form the other two Stones (Soul Stone and Time Stone) are in, or their whereabouts, but we'll know in due time. So far...

The Scepter (Control/Manipulation of Minds) - Earth

The Tesseract (Control/Manipulation of Space) - Asgard

The Aether (Control/Manipulation of Reality) - Knowhere

The Orb (Control/Manipulation of Power/Energy) - Xandar

There, you are now more or less caught up on various events. You should be able to go through Age of Ultron without a puzzled look on your face, and asking questions during the movie while important plot points are being revealed.