This week, I (Symon) have invited a guest to collaborate with, so listen. I'll introduce him. He's called Cedric, a guy who, for the most part, fancies himself as an artist and enjoyer of life. He resides in my head, so I have the misfortune of dealing with his chirpiness all the time. There's barely a quiet moment in my life, save for when he has 'something personal' to deal with. Those times are, unfortunately, few and far between. For the next 7 days, he'll be narrating events through his point of view.

Take it away, Cedric! 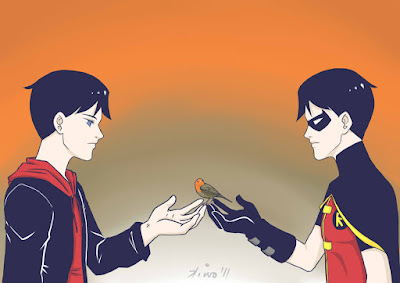 Ah, finally... My chance to stretch my writing muscles. This chance could not have come at a better time. Because I've been dying to tell someone. Symon's friend (I'm yet to meet him) became a baby daddy! It was so cute to see him carry the little guy, eyes glistening with pride and joy. I could barely contain myself. I could have said a lot more to the happy couple, had Symon not been either too tipsy or too exhausted.

We were at a party earlier and he was drinking that whiskey like he thought it would drown his inner demon. I was familiar with this routine of his, and he had been warned about it a few times before. You see, a party is not so party-ish when you have guys like him who sit quietly in a corner and be on their phone, generally existing while life happens around them. He had been warned that if he kept that up, he'd be invited to less parties. He was ready to resign to this fate but I could not allow that. So, he's since outsourced the party scene interactions to me, and I've been enjoying them immensely. Meeting people is such fun, I don't know why Symon has been avoiding it. I think in the past three weeks, we've met more new people than we did the whole of last year. He grimaces each time he sees me interact freely. I think inwardly he's rather jealous of me. Makes me want to piss him off even more.
Having indulged generously in camaraderie, I excused myself to take a breath of the cool breeze away from the crowd. It was a still night, with moonlight glowing its halo in the revering dark sky. It was a good night for a walk and some life changing event. I thought of that as I returned to continue from whence I'd left off. On the way, I received a message that my friend's wife was in labour.

Now, Symon tends to avoid getting overly involved in people's lives. For some reason, he thinks people are better off without him hanging around. But, I managed to talk him into getting invested in his friend's impending fatherhood. I made him promise to be there when his baby was being born. It seems he thought I had forgotten about that promise as I found him refilling his whiskey glass. I had to remind him that we had a life-altering moment to attend later. He shrugged, checked his phone, and reluctantly threw down the 12-year old whiskey. I could see the disgust on his face for making him do that. Apparently, whiskey must be respected. How I wish he gave as much respect to the people in his life that deserve it. Anyway, I shall teach him. I shall teach him how to feel things again.

I had digressed. So, we were at the hospital waiting in the corridors as we heard the blood-curdling screams associated with childbirth. Naturally, Symon tried his best to distract his friend with off-handed remarks about the straightforwardness of the whole affair, as he understood it. It wasn't helping. His friend remained nervous. While I was biting my fingers anxiously, gu Symon remained stoic. Like seriously, how can someone hear those screams and remain unbothered? Maybe he's seen some traumatic stuff and this didn't even compare. I don't know. He doesn't talk about such things. I was relieved to hear the screams of a woman replaced by the wails of a newborn. I was ecstatic! I ran about the hallway, dragging his friend along with me for a giddy prance. His friend couldn't wipe his astonished expression off his face. Sure, he was happy, but maybe jumping about wasn't what he had in mind. Soon, the wife and baby were wheeled out of the labour ward. I screamed a spirited 'congratulations' to the new parents. They stared at me with incredulity. Of course they did. They didn't recognize me. I whispered to Symon to introduce me and he muttered, "Not now." Heh, guess I'll have to wait another day. I did manage to get him to tell his friend that he had just received the best Valentine's gift ever! The baby was looking so cute, and his wife was radiant. She looked like she'd just eased the baby out. She was all smiles and hi-fiving whoever came to congratulate her. His friend then turned his attentions to Symon, asking why he was still single and childless. He encouraged him to catch up and not miss out on such joys. I told Symon the same. He's letting the good stuff pass him by and he doesn't seem to care even one bit. You should see the way he looks at beautiful women. Oba to him, they appear like bowls of matooke? I'm not sure.

(Symon doesn't like matooke. He never even glances twice at it in a buffet line-up.)

So, his friend asked him when he plans to settle down, he callously responds, "It will happen when it happens." I guess his friends are used to it by now. But it's a problem for us, because me I like girls. I think they make for interesting experiences, even if they bring drama. Oh yes, Symon doesn't like the drama that girls bring in life. He has mentioned that a few times. I tell him that's just cowardice. He should embrace it. If it happens, we can always deal with it. Believe it or not, a close friend of his actually recommended that he gets some drama into his life, for the sake of entertainment, because his life is so mundane! It suffocates me. I like a romantic walk under the stars every once in a while. I would like to hand her flowers and recite poetry to her. I'd like to feed her chocolate and massage her feet after a long day. I'd like to go on a boat cruise with her and tell that joke about love and the lake. But no... I can't do that while the tyrant retains the throne. He claims that I've contributed little to the peace we're now enjoying. Mbu where do I get the nerve? Mbu do I know what he went through to get the peaceful existence that we now 'share'? He fought for his peace and he intends to keep it, even if he has to fight again to retain it. When will he realize that we both want the same thing?