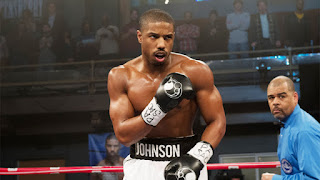 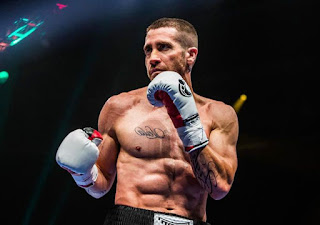 Last weekend, I found myself presented with a double-header of boxing movies. Now, I have a mild interest in boxing, but I still like the entertainment a boxing movie brings. Sadly, there are very few boxing matches in real life that are as intriguing as the Hollywood versions. Anyway, I took it upon myself to be entertained by ‘gladiators’ for whom the script of the fight is already written. That’s fine. But it’s the execution of each that created the vast gap that is between these two movies. Let me explain: 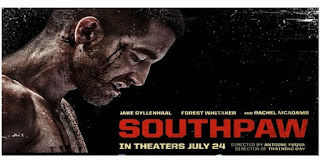 This one, starring Jake Gyllenhaal (Prince of Persia, Nightcrawler), is about a current Light Heavyweight Champion who loses everything and spends about 2/3 of the movie seeking redemption. I shall not fault the acting in this movie. It has credible actors/actresses (with the exception of Curtis “50 Cent” Jackson, whose acting ain’t worth a dime). Maybe it was the flow of the story. I failed to get invested in the life and struggles of Billy Hope, the disgraced champion. First of all, it was his own stupidity that cost him everything. So, we're suddenly supposed to believe that in a few weeks, he's on the path of redemption. And the only way to do that is to fight 'one more time'? It also went to show (or appeared to show) how flimsy riches can be. You go from wealthy to scraping by in just a few weeks, despite having the 'best manager in the business'? I'll let that one slide. But even at the end, while there was a moral exposition, I was barely moved. I was like, “Yeah, typical Hollywood half-assed attempt to make a credible story.” In fact, I spent most of the time WhatsApping and Instagramming and Facebooking. Yeah, it was neither engaging nor riveting, and I found no need to even root for the main character, or care about his story arc. Again, this had little to do with Jake’s acting abilities. Perhaps the movie was better suited as a biography. As for the boxing itself, I'd rather watch Fight Club or Banshee if I want bloody, semi-skilled brutal brawling. And even saying 'semi-skilled' is an insult to my preferences.

This one stars Michael B. Jordan (Chronicle, Fantastic Four) as Adonis Johnson Creed, the son of Apollo Creed (from the Rocky movies) and light heavyweight boxing prodigy. He’s a natural talent but at the start of the movie, he has been self-trained and has no professional experience. He’s not had a father figure in life but he’s a pretty sensible guy. He’s rather relatable and even likeable. He refuses to be associated with his father’s boxing legacy, instead preferring to forge his own. But in the end, he comes to terms with being his father’s son, and the pedigree that comes with it. So immense is his fighting prowess that the champion actually calls him out for a fight! It’s a struggle that’s common with children whose parents’ achievements put pressure on them. But this guy manages to shoulder the burden with his head held high. There was not a dull moment and I thoroughly enjoyed watching this movie. And the requisite final fight? Ah, it was splendid. It wasn't just the fight, but the atmosphere of it. The commentators were hilarious. Plus, who doesn't like a capable underdog? It's not even one of those movies where they appear to cheat for the underdog. Nope. This one brought the goods. Left the opponent relying only on his vast experience and even that was barely enough to keep him on his feet. All round, it was an amazing movie.

In summary, I think Creed was the better boxing movie. And it's not even by a TKO. It properly floored Southpaw and even did a victory dance. It wasn't pulling any punches. Okay, enough of the boxing puns. I know some will disagree. If you do, please state your reasons. I’m a reasonable gentleman. No need for frothing and name calling, yo!
Posted by Safyre at 8:43:00 AM