After reading Basix‘s latest joint, I feel somewhat inspired to 'take part' in this kind of thing.

3 things that scare me…
Misplacing my keys
A phone call from a certain cousin
The phrase 'We need to talk.'

3 things on my desk…
Notebook
Laptop
A book titled 'WTF, Evolution?! - A Theory Of Unintelligible Design'

3 things I can do well…
Read
Write
Fix stuff

Don't be shy. Try doing your version. For now, I invite Nev, Gerard, Lynn, and Rogers to partake (evil smirk).
Posted by Safyre at 12:34:00 PM No comments: 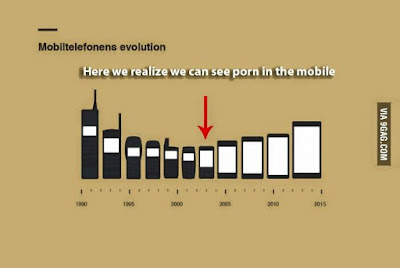 We've really come a long way from the cartoonish green screens to the vibrant colour displays of modern smartphones. The advent of smartphones was a godsend. We were saved from banal and leg-breaking banter that filled up most of our days.

You remember how awkward it was to be waiting in a restaurant reading old text messages on your tiny Nokia 2300 while you waited for your date to show up? We don’t have to do that anymore. Now, you could be reading a book, going through those (usually hilarious) WhatsApp pictures and videos, play an epic role playing game, or simple Candy Crush. Anyway, waiting has been made so easy it’s practically an item on everyone’s roster. If those guys in the reception lounge are anything to go by, you’d be forgiven to think they just came for a nonexistent meeting simply so they could sit in the vey comfy leather couches and surf using the office Wi-Fi. Were you the awkward introvert at parties, who was always forced to ‘go make some friends’? No problem. If the pictures on your phone won’t break the ice with the saucy stranger, you might as well just talk about it to your friends on social media. It’s a brave new world for people out there.

I'm yet to find a direct correlation between phone size and social status. The iPhones are small but seem to command respect. But not from the guys who rock Google Nexus phones. Those ones look at the iPhone guys like they are cavemen beating at a computer. I'm not one to judge. One should always get what makes them happy. Unless you're a heavy user of Instagram. In that case, the bigger the screen, the better. Trust me.

Of course, it’s all fun and games until the battery inevitably runs low. Man, these phones are such power-hogs. My previous phone probably had the record for the fastest battery drain, going from 100% to 0% in an astonishing 4 hours and 12 minutes. Yes, it was officially timed. So, I was the guy moving about with a charger all the time. I still detest power banks, because it would barely ever solve my particular problem. In its defence, it really was a tired old phone. Still, it made for interesting social situations. As a habit, I found myself engaging in social graces only if the battery was low. I won’t speak of the merits that resulted from such habits, but let’s just say it was tiresome. So, when it became inevitable to ditch it, I decided to take it several notches higher.

My current phone, which I fondly call ‘The Armoured Titan’ is quite the beast. I scoff at power banks now. It’s such a behemoth that it’s frighteningly sluggish. Its current record is from 100% to 7% in 46 hours. And that is on average usage. The best part is that I can continue to be antisocial without fear of my battery running out, thereby forcing me to endure tiresome interactions.
Posted by Safyre at 6:04:00 PM No comments:

The Impersonal Side Of Transporters

I’ve had the most random misadventures with transportation personnel. The boda guys are so far the biggest culprits of this habit. The boda guy will ask you about your children. Then he will sound offended when you tell him you’re still childless. Then he will remark about how he’s about your age and yet he has three children. He’ll even ask you what you’re waiting for. And you’ll ask yourself the same question, forgetting that you actually know the reason why you’re single and childless, not in any particular order. So, you’ll tell him to be quiet and just ride along. For some reason, that instruction will only slip through his mind like water on the back of a duck.  He’ll ask you about ‘Tubonge’. He will sigh with bemusement when you tell him you have absolutely no idea what he’s talking about. He’ll then take it upon himself to educate your ignorant self about his political views.  At some point, you’ll just give up and sit silently until you reach your destination. You pay him and delightfully see him ride out of your life. But that never helps when you have a designated boda guy. You can rest assured that you’ll continue that conversation next time you require his services.

Then there’s the taxi guys. Now, I tend to find myself in late night taxis with a disturbing frequency. There’s nothing you want more than to take the short trip from office to home after a long day, so you can relax and unwind, and munch cereal for dinner. If you’re a bachelor, the rules for nutrition are not written on the wall. Normally, you’re the only guy waiting for a taxi at the stage, and people are unlikely to be walking slowly at that time. It is my working assumption that people who are at taxi stages at night know where they are going. Therefore, I find it hard to understand why a conductor stops in front of a couple who are not even at the roadside, to ask them if they are going. The conductor will completely ignore the fact that the couple are lovingly gazing into each other’s eyes and whispering unmentionables. Of course the other passengers will point out the obvious. But upon looking at the 6 people in the taxi, the conductor will feel obliged to try and convince the lovebirds to continue in the taxi so he can meet his night quota. Having been rejected by that couple, the conductor will look across the road at a random guy buying roasted maize. He will shout towards him, asking whether he is going. I don’t know what gesture the guy could have responded with that encourages the conductor to wait for him. Because as soon as the guy gets his maize, he heads off in the opposite direction, at which point the driver will call the conductor names and drive off.  The whole journey takes twice as long as it should, with the conductor repeating this error until you reach your stage.

Now, some people have the benefit of walking home from the taxi stage. That can be surreal, especially in the moonlight after a long day. You get to relax your thoughts and compose poetry. I’m not one of those people. I’m one of those that needs to get a boda to take me home from the stage, for it is not a walkable distance by my standards. So, I begrudgingly greet the boda guy, hoping for a swift and peaceful ride home. And that’s what it’s like for a few minutes until the boda guy says, “But you... Why don’t you have a woman at home so you can go home early instead of being out till late?”
Posted by Safyre at 5:16:00 PM 1 comment: