"Carbonite  - a fictitious liquid substance that was made from carbon gas and could change into a solid through rapid freezing. Goods could be encased in carbonite for preservation, through a process known as carbon-freezing." - A Star Wars reference.

They often say a picture is worth 1000 words. But there are pictures that are capable of rendering me speechless. It’s a record of an activity that’s boiled down in one single moment that tells you everything you need to know. It tells you the weather, the mood, the tone, the context, the subtext, the plot, the character… Man, I wish I had the “photographer’s eye”. They say the best photogs know how to predict a moment. They set their cameras, adjust filters, work out the zoom and composition, and wait for the inevitable moment to fall into place. It’s like clairvoyance. Most of us will only be aware of the moment at the time it’s happening. But it’s different in film. The photography director sets up the scenes so they can add subtext to the overall story. Much like in real life, they give you defining moments to capture and keep for remembrance. To that end, I’ve gathered a few screenshots over time that I found ‘interesting’. Here are some of them, and I’ll share with you why.

After burning up what they thought were the only affected people before the world was engulfed in a zombie apocalypse. The charred remains show you just what kind of situation was at hand before the victims went up in flames.

The lighting just happened to give Mr. Ledger’s hair a green tint, which was like foreshadowing for his defining role as The Joker in The Dark Knight.

How do you show two people conversing face to face, at the same time showing both their faces simultaneously?

The young Boba takes up the decapitated head of his father, Jango Fett. It is then that he decides to follow in his daddy’s shoes and become a famous galactic bounty hunter.

You can feel like something bad is about to happen, despite the cheery applauses.

When someone keeps telling you that they’re supposed to be king, and then the 'castle wall' agrees with them. It’s ‘written’ on the wall.

The Mark of the Captain

One captain leaves, another one takes his place, along with the seemingly hereditary mark of captainship.

Captain America is not a mere man, that he should be defeated by a lift full of highly trained military operatives. Apparently, the numbers count for nothing when you’re ‘superior’ in every way.

So, a musician (Jaguar) decides to floss in a luxury car (Bentley), and I’m wondering whether it wouldn’t have been more apt to floss in a Jaguar (car).

What it means to follow someone, in some scenarios. Apparently, people get tattoos to show fealty. Us normal people simply wear company shirts.

He thought he would be the king of Harlem, like Notorious BIG before him.

He’s a death-dealing pirate, a skilled swordsman and a medical doctor. Ironic, isn’t it? He’s actually nicknamed “The Surgeon of Death.”

Sins of the Father

We are bound to repeat the sins of our fathers if we do not learn from them. No wonder people like to know who someone’s father is. I’m not sure about this, but I think a lot of people would love to say, “You are indeed your father’s son,” or “The apple doesn’t fall far from the tree.”

Let me go and acquire "the photographer's eye". I also want to take pretty pictures or set up awesome visuals some day. I shall not live on writing alone. 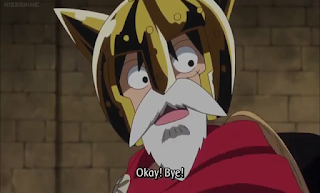